St Petersburg in June - Remarkable Things to Do and See

recent posts
June is a wonderful time to visit St Petersburg. There are festivals, canal cruises, and the famous White Nights are in full swing. It’s a magical time in an amazing city, and St Petersburg visit in June will be something that you’ll remember for the rest of your life.﻿ 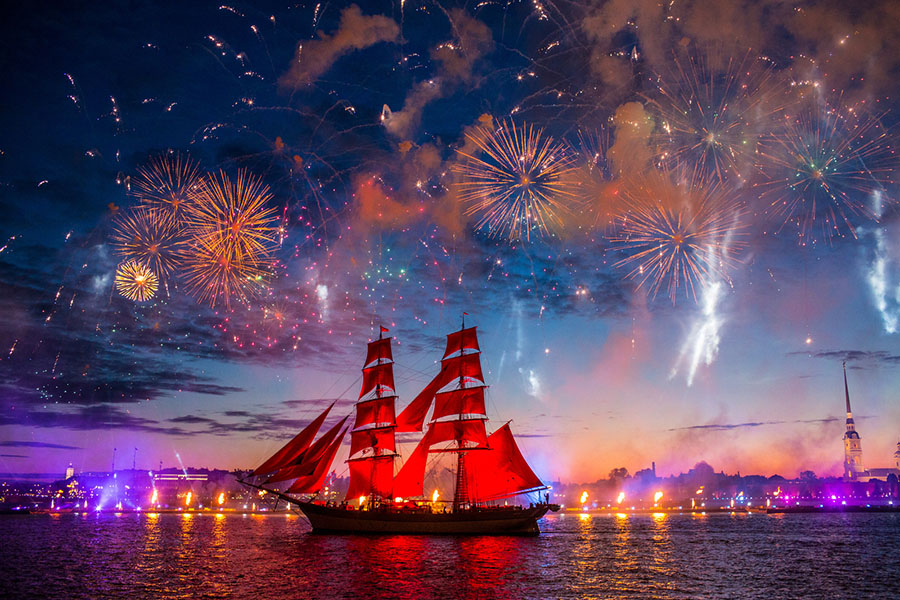 The White Nights are one of the main reasons for visiting St Petersburg in June. Because of the city’s northerly location, the sun never dips below the horizon from around 11th June to 2nd July. The White Nights mean dressing up for night-long parties, theatre, art and meeting friends and family for a good time.

There are several events and festivals associated with the White Nights. The Scarlet Sails is the most public and easy to enjoy. It involves a boat with scarlet sails travelling up the Neva River, accompanied by fireworks, music, and a spectacular water show. Around a million people attend every year.

Other major events include the Stars of the White Nights, which is a series of classical opera, ballet and orchestral events, and the Carnivals of the White Nights, which usually include actors in period costume, usually from the time of Peter the Great. If you’re more interested in pop music, then major Western artists often schedule shows in St Petersburg in June and July; check the music press to see if there’s anything on during your vacation. All performances should be booked well in advance.

Another highlight of the White Nights is that this is the best time to take a Canal cruise around the city. St Petersburg is known as the “Venice of the North”, because of its network of canals and rivers. During the winter, these are frozen and impassable. In the warmer months, you can cruise around the city in the evening; these trips often include a dinner, dancing or a folk music recital. You will also travel under some of the drawbridges that allow ships to access the Baltic Sea. This is a fabulous and romantic way to see the city.

There are three main disadvantages to St Petersburg trip in June. The first is that hotels, restaurants and attractions know how attractive the city is during the summer, and set their prices to match. St Petersburg in June can therefore be more expensive at other times of the year. One way of getting around this is to visit on a Cruise to St Petersburg, as part of a tour of the Baltic Sea. Staying on board a cruise ship can be much more cost-efficient than staying in the city itself.

Museums, churches and other attractions can also be very busy in June, too, meaning that it will take you more time to get around.

Finally, the St Petersburg International Economic Forum is held in June. For the three or four days that the Forum is running, the city is even busier than usual. Also, the security for various Russian and foreign dignitaries can make it more difficult to move around. Police may halt traffic or block main roads, causing traffic jams.

Overall, June is a great time to visit St Petersburg, and you’re sure to end up with holiday memories that you will treasure forever.

Did you know you can enter Russia visa-free if you are travelling by cruise ship?